Pinkie, a Cockatoo Abused by Love 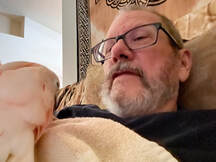 Her Daddy loved her more than anyone will ever know. He fed her special cooked foods, played with her, gave her undivided attention and love. The world she knew was a string of days that shimmered in the light of her Daddy’s love. There were others in her life but none to compare to him.

Then Daddy got ill. Suddenly he was gone and her world ended. Far from her in a hospital bed George asked his wife Mary to take care of Pinkie. Mary knew little about caring for Salmon Crested Cockatoos. Although she had lived in the same house with Pinkie for over ten years they had spent little time together. George took his wife’s hand and begged her to care for his baby. Mary agreed. Her husband’s heart was failing and he loved that bird so much. She swore she would never give her away. She kept that promise for two years.

Mary knew no one else that had a parrot. Her world had turned upside down when George died and she wanted badly to reach out to Pinkie; she felt she was part of George. He had loved her so much. She tried to make contact but the bird was unwilling. When Mary opened the cage door to feed her and give her water Pinkie stayed in the back of the cage and watched her with wary eyes. No words that fell from Mary’s mouth made any difference. Pinkie stayed on the farthest perch from her.

Pinkie, who had rarely been loud during the day, squawked and squawked. No matter how much Mary spoke softly to her Pinkie would rarely quiet down. The noise began to drive Mary crazy. The sound of her husband’s bird crying out all day was horrible.

One day, Mary tried to reach back to touch Pinkie. Pinkie had made a stabbing motion with her beak at Mary’s hand. She drew her hand back in fear. That was the last time that Mary tried to touch George’s baby.

She felt like a failure. Yet, she had given her word to George that she would keep her and care for her. That was when she moved Pinkie’s cage out of the living room and into the extra bedroom. Once a day she went in to that room to clean the cage and give her food and water. The sound of Pinkie’s cries were muffled by the closed door but they were still loud. In time, Mary closed the drapes in the room and Pinkie’s cries eventually came to an end.

Two years passed. Pinkie sat on the same perch unmoving every time Mary came to clean her cage and feed her. The single light Mary turned on when she came in was dim. Mary had stopped even looking at the bird hidden from her on the highest perch behind ancient toys. Mary hated herself but did not know what to do. A promise is a promise.

One day Mary was shocked to find Pinkie bleeding and lying on the bottom of the cage. She had not looked at her in so long that she could not believe what she saw. Instead of a feathered beauty she saw a nearly naked bird. After two years in solitary confinement Pinkie had lost all the feathers below the neckline. Her entire chest and legs were covered with deep scars and she was bleeding from several open wounds. Mary thought she was dead at first. Without realizing what she was doing she reached out and touched Pinkie. She was warm. She was still alive.

Mary ran out of the room and called information. When she got the humane society on the line they gave her a number to call, a bird rescue. Mary spilled out what had happened in a flood of tears to Linda at the rescue. In less than an hour Linda arrived at her door.

Linda took Pinkie from the cage and put her in a small carrier. She brought out the release of ownership form and Mary pushed it away.

“No!” She cried. “I promised my husband I would keep her.” Tears streamed from her red eyes.

Linda spoke gravely, “I need to get her to a vet now. She needs people that understand her and can care for her, people that understand parrots. She will die if we don’t help her both physically and mentally. You don’t want her to die, do you?”
Mary collapsed in a kitchen chair and buried her face in her hands.

Linda put the form in front of Mary again. Mary signed it. The front door sprung open as Linda rushed to her van, placed the cage in the passenger seat, and drove off in a race to save a life. All the way there she spoke to Pinkie reassuring her that everything would be ok.

The doctor treated her wounds topically with betadine solution and gave her a broad spectrum antibiotic. A test revealed that she was suffering from systemic infection due to self-mutilation. Furthermore, psychologically she was nearly catatonic, her eyes barely responded to light at all. Six hundred dollars and two hours later all the test results were in. After a rundown on the situation the vet suggested that she be taken to the sanctuary directly and placed where she would never be alone. She needed socialization more than drugs.=

That is how Pinkie’s cage, freshly delivered from her former home, made it into the living room of the sanctuary.
When I met Pinkie time had healed all but a quarter-sized scab on her stomach. After six months at the sanctuary she had stopped hurting herself. She will never have feathers below the neck line again. She no longer hides in her cage but she will not let you hold her. She will let you scratch or rub her neck. She plays with her destructible toys a little each day.
If you sit on the couch and wait she might come over and sit by you. She likes to do that. She just climbs down from her cage and waddles across the room, climbs up the couch and plops down next to you. How does it feel to be next to a half-naked bird with eyes that still look mostly like dark glass?

Honestly, I don’t know. I wasn’t at the sanctuary long enough to find out. I will bet it feels like heaven on earth.

This is a sad story. Pinkie lived another two years but the toll on her spirit was too much. What can we learn from her story? When we take on the responsibility for a precious life we should know what we are doing. No amount of wishing to make it right can replace dedication and knowledge. What Mary did she did out of love for her husband. It is best to act only out of compassion with loving-kindness.

This story tells much about the adoption process. When you choose to adopt from a rescue keep one thing in mind. Although the bird that chooses you might not be half-naked and glassy-eyed, you don’t know how much work has gone into bringing him or her back from great sadness or sickness. Adoption isn’t an easy process. Try and understand why. Each bird is a labor of love and you weren’t there to see all that had to be done, all the love that has been dedicated to the bird you wish to adopt. For the rescuers it is more like giving up children than adopting out a bird.

Decided that you can’t live without a bird? Are you ready to take your vows?

This vow may have a familiar ring to it:

“Do you take this companion for better, for worse; for richer, for poorer; in sickness and in health; to love and to cherish, till death us do part?”

Parrots take this vow. Will you?