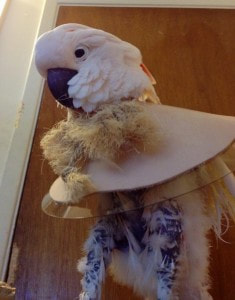 Sugar, in 2012
When working with rescue parrots you see many things: suffering, neurosis, and psychosis. Often I see eyes darkened by futility. They have given up. They have reached the point where they would rather die than continue living. Life has become a living hell where the one that they wanted to love has turned into a demon. Because of that demon, they become raving, screaming creatures that would do anything to make the pain stop. There is nowhere to turn; they live in a nightmare world.

This is how most people come to us. As rescuers, we naturally take the first paragraph to mean the suffering of birds. No, I am not talking about a parrot being relinquished. I am describing many of the people who turn over their birds to us. Often they are close to mental breakdown. They never dreamt that the sweet-looking, cuddly cockatoo they brought home would turn them into awful, spiteful people who throw things at cages and yell “stop it” at the top of their voices. Often they have abandoned the bird to its cage because they are afraid of another bite. Many times they cover the cage to stop the incessant screaming. Most of them would feel contempt for someone who mistreated a dog. In truth, I think most of them feel contempt for themselves. They hate what they have become.

Not all those relinquishing a bird come to us in this state of mind. Quite a few, however, do.

What is the usual cure? We take the bird from them and let them return to their lives. Once the bird is gone, they no longer scream “shut up” while their faces turn into masks of anger and frustration, they are no longer consumed by the need to outwit the harpy that has stolen their peace. The incessant sound of squawking is gone. The beautiful bird they once wanted is now living somewhere else and it doesn’t matter where. They cannot help feeling that they somehow failed the bird and this still haunts them; time slowly buries those wounds. They feel as if they brought home a Persian rabbit and watched it slowly turn into a monkey with wings. Those eyes, those knowing and intense eyes, no longer look at them with reproach from behind the cage bars. The beak no longer threatens them with pain. The nightmare is over.

It is our ignorance of their nature, our ignorance of the preventive measures, our ignorance of the antidotes that turns these beautiful creatures into living gargoyles. Bertrand Russell, the great Western philosopher, responded to the phrase “Ignorance is Bliss” this way: “Only the ignorant would think so.” Ignorance is not inborn. We must treat ignorance with the salve of education. I know, I was once as ignorant of the plight of parrots as everyone else. Chloe was the stimulus that brought me to awareness. Because of her, I sought the knowledge that gives me the power to help them.

Parrots and cockatoos take us by surprise. Even though they are a mystery, they seem safe enough behind those metal bars and most people find that comforting. “I can bring it out when I feel like it and then put it back,” many would say. No one tells them that having a parrot is like having a five-year-old with a pair of pliers and a foghorn. No one mentions to them that the five-year-old will go through puberty and be a teenage five-year-old. No one mentions that they are the last true dinosaurs still living on land and reminds them of what happened in Jurassic Park. No one mentions that most will die if released into the wild. Parrots and cockatoos in captivity are still wild. You can break their spirit but they will always be wild.

Usually, the personality changes come slowly over a period of weeks. A young parrot will respond to the inappropriate petting of a human. Most people sexually arouse these wild animals and bring out their protective instincts by petting them down the back or under the wings. There are so many pitfalls that in a short time the birds begin biting, screaming and acting like angry children. Their “owners” unknowingly teach them to do these things. It’s not the bird’s fault. And, since the people have no idea what a parrot is, it’s not their fault either. A frustrated parrot can bring out the worst in those who do not understand their nature. Only education can change the vicious cycle of adoption, fear, loathing, and relinquishment.

Rescues and sanctuaries are usually full; there is no room at the inn. Just finding a rescue or sanctuary is hard enough and placing a bird in a home is an immense hurdle. Finding those willing to help you to work out the issues with your bird is even harder. Most people do not look for help because they are already at their wits’ end. As children, most of us learned to take responsibility and so we try to find solutions on our own. With parrots, this is a shot in the dark that usually fails miserably. They might as well be trying to live with a raccoon or a possum (except that neither are as smart as parrots). They give up and then find out that no one can take the bird.

Guilt, fear, anger and sadness often consume those who give up their parrot. All we tend to see is the malnourished bird, with its chewed feathers and glassy eyes—like a doll’s eyes. It is hard for us to see the suffering of the people who relinquish the parrot. It’s true that some people treat them as a commodity and a source of income. I often wonder what makes people so callous, so unaware of the beauty of life; I wonder at myself, too, because I spent my youth that way. But most of the people we see are those who made a hasty choice and find themselves in living hell, torn between guilt and frustration.

If we can learn to see that both sides suffer, then we can apply a salve to both wounds, healing both the human hearts and the winged ones as well. The more we educate others, the less suffering there will be on both sides.

I have seen the joy in a parrot’s eyes that has a new life with a caring and loving companion. For me, nothing compares to that feeling, nothing. To see even one bird love and trust again is worth the effort of a lifetime.

Sugar in 2015
As we spread the word about the true nature of parrots and cockatoos, they will find loving companions. We will also help others to avoid the heartache that goes with trying to own something beyond their understanding.
​
Parrots live in a different world far removed from humanity. They bring that world with them in their genes. Education is the bridge between these different worlds. It is our mission. Saving lives is much more than re-homing parrots. Re-homing and fostering sometimes bandage the bleeding. Education has the potential to end the suffering once and for all.
DONATE NOW