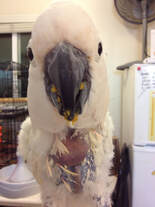 If you have any doubt about how to deal with a broken blood feather, the following story should help. My mistake may safe your bird’s life. While I was socializing the birds in the main bird room, Simone, an umbrella cockatoo, walked up to me on the floor. She looked me straight in the eyes and held out her right wing. I had Babalu, Cecelia and Lauralei on me but I moved fast. I moved Lauralei to the left arm of the chair, moved Cecelia to the right arm of the chair, jumped up carefully, and gave Bab the cue to go into his cage without a treat. I picked up Simone and examined the wing. The primary feather closest to the secondaries was broken and bleeding. I could tell from the thickness of the shaft that it was a blood feather because the shaft was thicker than normal. A thin line of blood was trailing out; a broken blood feather is like an open faucet because both a vein and an artery are connected to it. Parrots do not have much blood—their adaption for flight requires the lowest weight possible—and there is little time before they will die from blood loss.

I had the situation prepared for. I grabbed the needle nosed pliers purchased for this purpose, toweled her as gently as possible, and exposed the right wing. Using a practiced technique I cradled her in my left arm against my body using my forearm to keep her from moving. Since I live alone I have little choice. The difficulty is to do this without applying pressure to the chest; a bird can suffocate from even mild pressure against their chest. The reason for this is that they have no muscles to inhale, only muscles to exhale. Too much pressure against the chest stops them from breathing. Now that she was cradled I used my hands to spread the wing open. Holding the wing open with my left hand I pinched the skin at the base of the blood feather. Now I was in position to pull the feather. I took the pliers and grabbed the feather near the base and pulled gently; you never yank at a feather or you might damage the follicle. The feather did not come out. Examining the end of the feather I saw that the shaft was smashed and that using the pliers might actually have weakened the feather shaft. I tried again and failed. I grabbed the Super Clot and applied it to the feather shaft. I could not believe my eyes: it worked, the bleeding stopped. This was like putting a Band-Aid on a cut jugular artery. It should not have done the job at all.

Fearing that further attempts to pull the feather would start the bleeding again I called Dr. Young’s office, the closest Avian Vet, and let them know that I way on my way. I put Simone in a carrier, lashed it down in the truck, and headed straight to the vet.

I kept checking Simone to insure that the bleeding had not started again. In these cases the feather must be pulled. Even if miraculously the bleeding should stop the odds are that the flow will start again. Do not take that chance.

When I arrived I heard the receptionist calling out “They’re here!”

We were ushered immediately into the examination room. Dr. Young was performing an operation on another animal at the time but he dropped everything to come in and remove the feather. He was doing an operation removing a tumor! Why would a vet do such a thing? That is because there is little time left for bird that has a broken blood feather. Once the feather is out the danger of bleeding is over unless a mistake was made in the extraction. Remember: pull gently, do not yank the feather. The doctor was in and out of the room quickly because it does not take long to remove the problem feather. He did make a point of telling me to be sure and always use a hemostat with serrated jaws. There are two reasons. The serrated jaws lock into the feather and provide a firm hold on the shaft. The handles lock into position so that you do not lose your grip and also can concentrate on the extraction without worrying about applying downward pressure on the handles.

You will find a great deal of conflicting information on the web if you search for information on this issue. Some sites recommend using pliers and you do not want to do this for the reasons detailed above. Use a hemostat with serrated jaws. Some sites will also tell you to use flour, corn starch, or styptic powder. None of these is a solution for bleeding that you can depend on. Flour or corn starch might invite infection and are messy. Styptic powder is messy and difficult to apply adequately and generally has no pain reliever or disinfectant. Super Clot is a gel and it applies easily. It also has a disinfectant and lydocaine, a pain reliever.
With all the practice that I have done in preparation for this incident I still made a critical mistake: I did not understand that hemostats are the only sure way to remove the feather. Please heed my advice and be prepared. In our world there are many dangers and broken blood feathers are far too common. Learn how to do this procedure. I cannot implore you enough to be sure that you are prepared. There is usually no time to get to a professional to have the feather removed. Attempting to run to the vet is putting the life of your companion at risk: in most cases birds die within 20 minutes from loss of blood.

In a few rare cases the feather might need to be surgically removed. These situations are unusual but you might need to have someone hold the bird and apply a cotton compress soaked in Super Clot with their fingers. An immediate trip to the doctor is critical. Be sure to call ahead and let them know that you have a life-threatening broken blood feather to deal with. An avian vet will understand and should be ready for you when you arrive.

Be sure that your bird is comfortable with being toweled. If not, you will have a heck of a time getting them into position to pull the feather. Also, fear accelerates blood loss. It is best to have two people working together to remove the feather, one holding the bird and the other doing the procedure. If you are single, as I am, then you will need to do it alone. Practice doing it alone even if you are not single. What if it happens and no one else is around?
​
Knowledge and practice can dispel your fears. Plan some time to practice the method described in this article and prepare for the worst. As the doctor in Terms of Endearment said: “hope for the best and prepare for the worst.” It is a good way to deal with life in general. It is a great way to save lives.